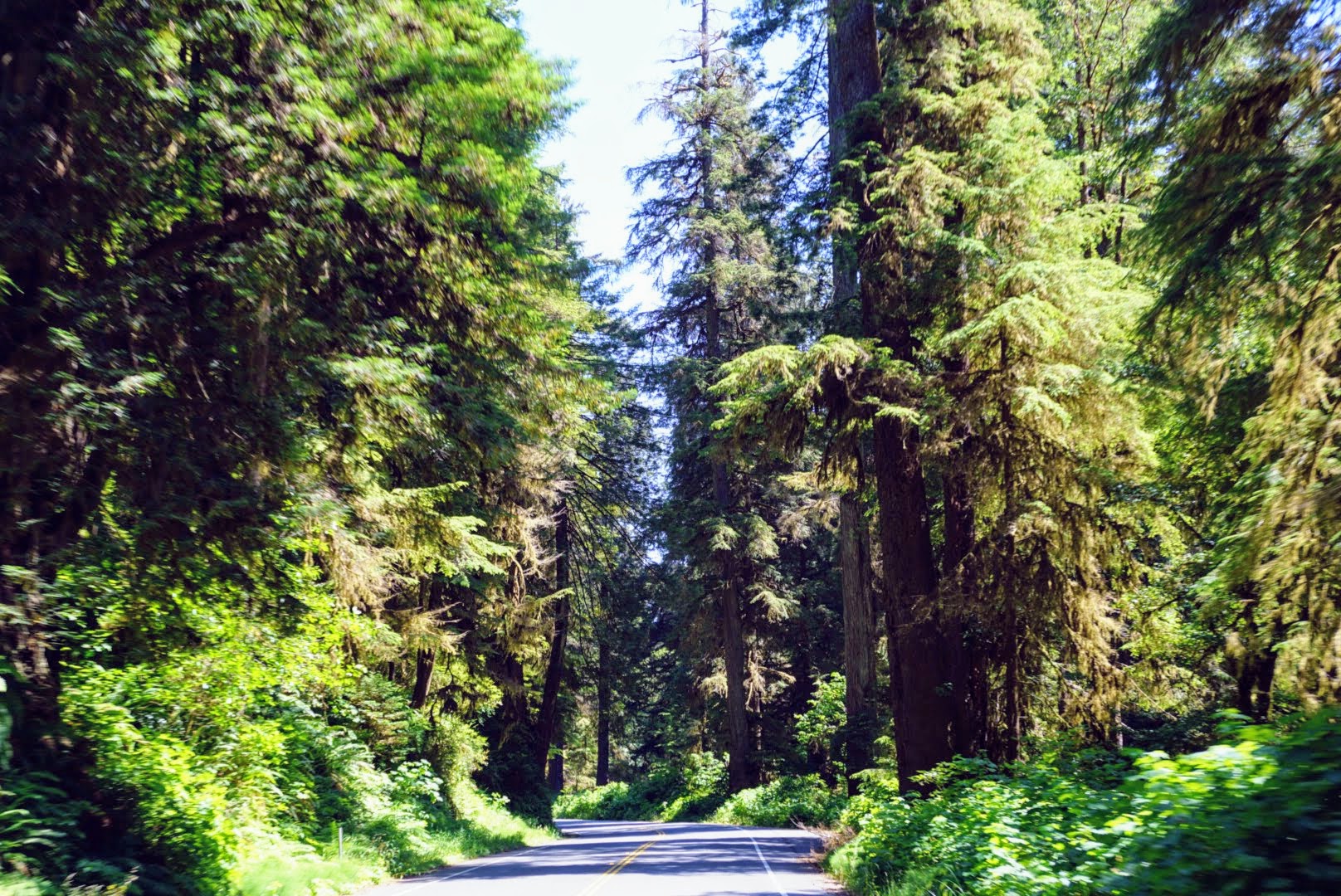 For our Fourth of July weekend in 2019, we set out to explore Redwoods National Park and the Redwoods Coast in Northern California, six hours from Portland. We managed to get three days of solitude on a beautiful coastline and in the company of endless groves of massive ancient redwoods. This post is a photo log and some description of the places we encountered. Here is a small playlist to accompany the post:

Campgrounds tend to be hard to come by for Fourth of July weekend and require some forward thinking to get a hold of one for the weekend. Especially so for coastal campsites. While a good amount of the Southern Oregon Coast campsites were booked for us, we had some luck getting spots down at Kamp Klamath in Klamath, CA. It’s a frontcountry site with some decent amenities and while a little loud, it had great access to the nearby beach and Klamath River.

Another option for this area if you prefer a backcountry/designated style site is the Flint Ridge Camp. It’s about a quarter-mile hike and you need to pack your own water in, but there are picnic tables, fire pits, a bathroom, and it’s on a nice secluded hill overlooking the sea. We didn’t opt for this spot since they’re first-come first-serve and I assumed it would be full, but I imagine it would be a nice little spot if you did manage to nab one of the sites.

Our first order of business, climbing! We woke early and met our friend Juan and his crew at the entrance to the beach and walked down together. Our path here was through some private property belonging to the local Yurok tribe, but it sounds like there is an alternate path that you can use to access the beach further up the road at this spot: https://goo.gl/maps/cSqgQkgnCGhonXB19 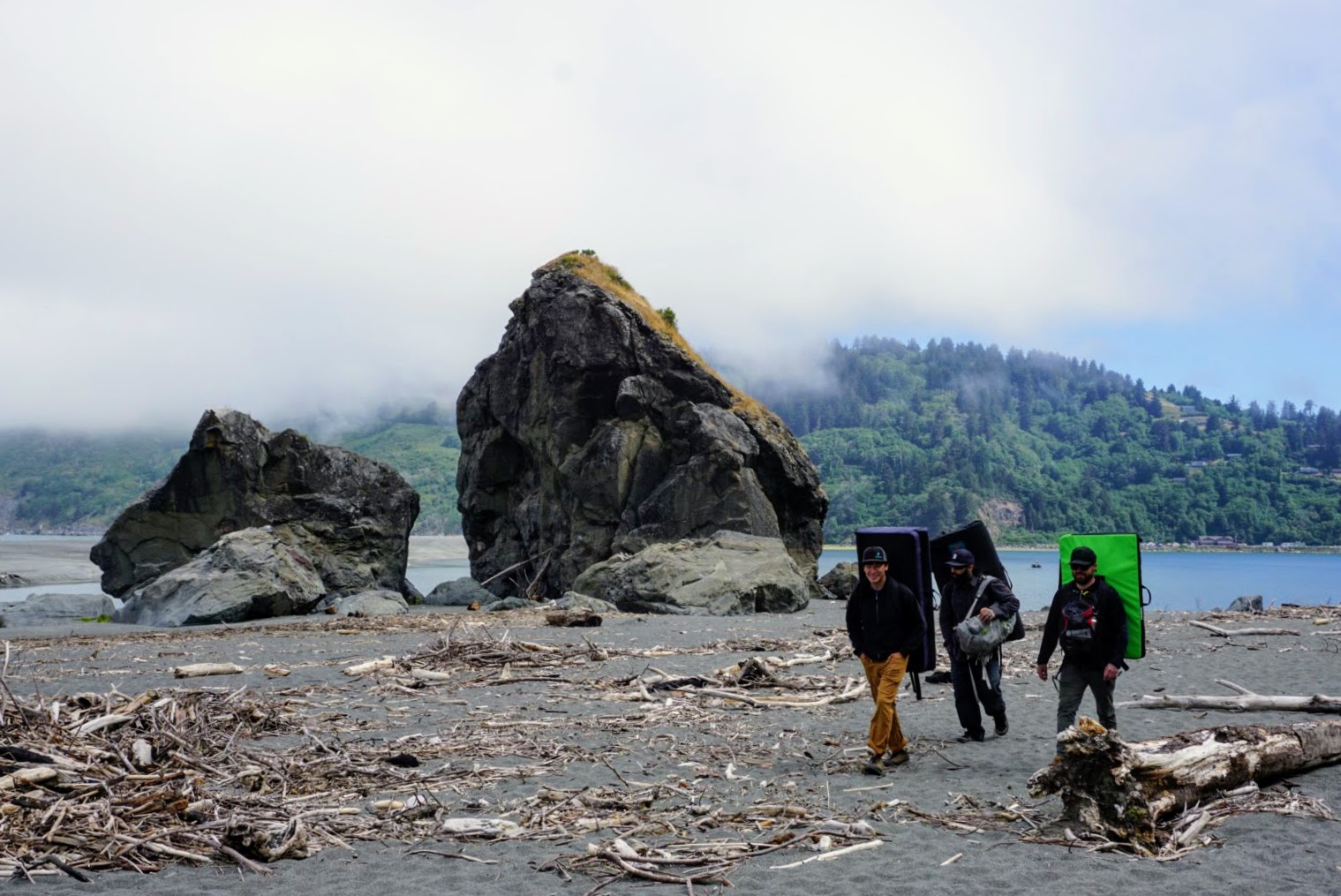 It’s hard to overstate the serenity of Lost Rocks. Dozens of boulders strewn about the beach and hardly another soul in sight. We took in the scene: The calls of the gulls, the crash of the surf, the salty air, the cool misty breeze, miles of Douglas firs lining the sand, and a gorgeous green and tan sea stack rising out of the water.

The rocks are a metamorphic type, and offer plenty of different styles and grades. And fascinatingly, the sand levels can shift overnight with the tides, revealing new problems or covering boulders completely. Lost Rocks indeed! 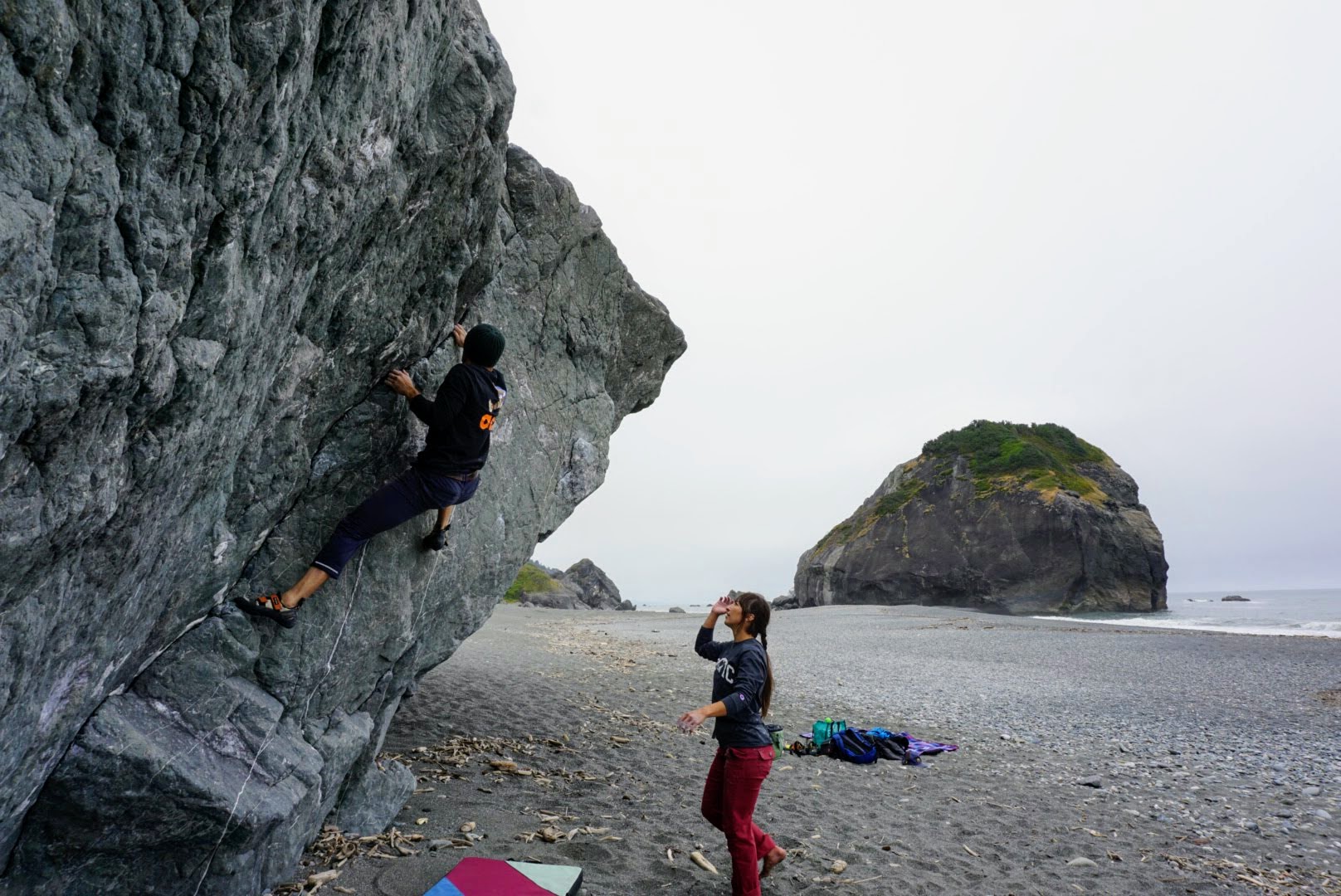 Cedar and I spent three days cruising around this beach, with both old friends and new. We relaxed at the base of different boulders, trying different problems and soaking in the bliss of the spot. I also brought my sketchpad and took home my own depiction of the area. 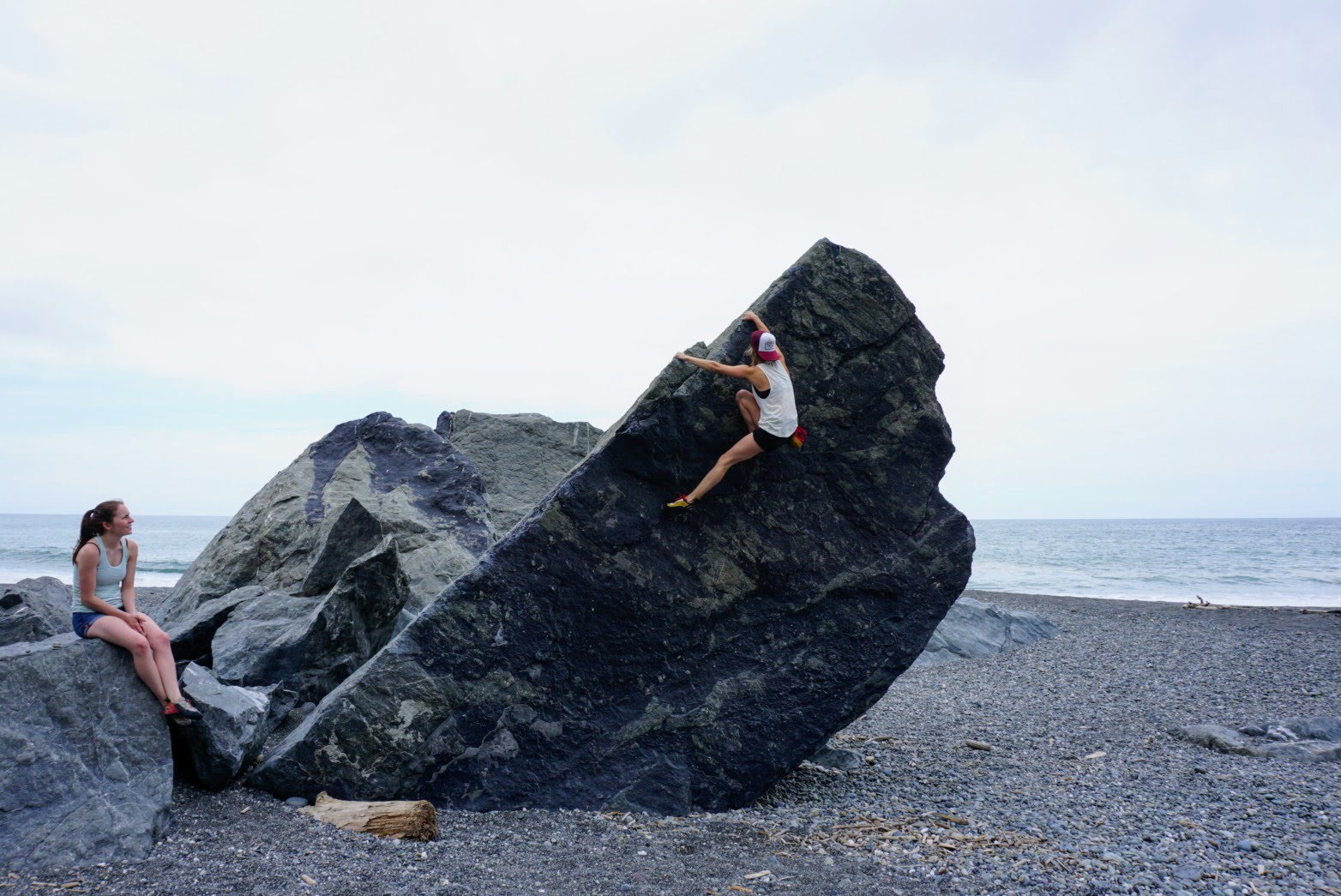 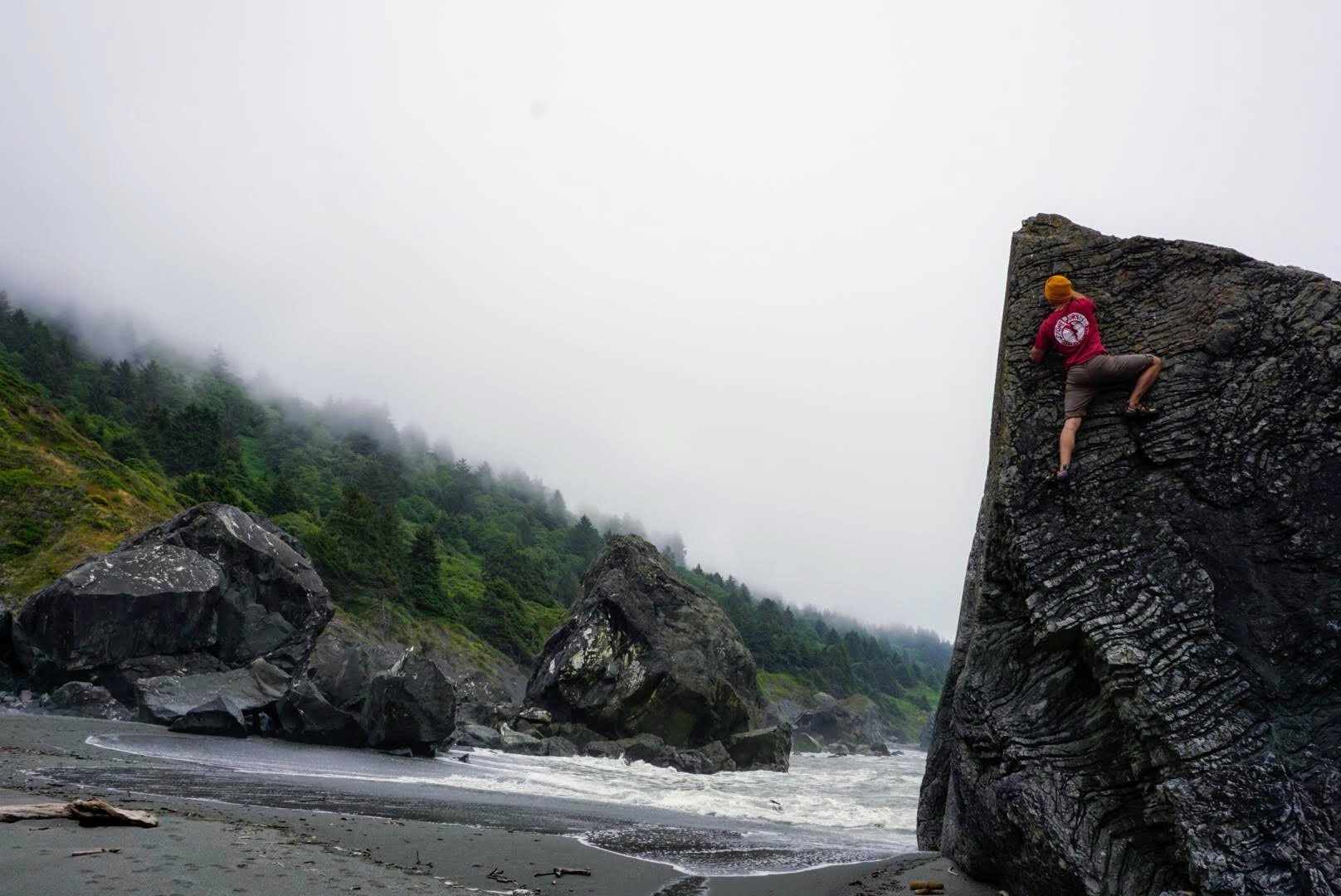 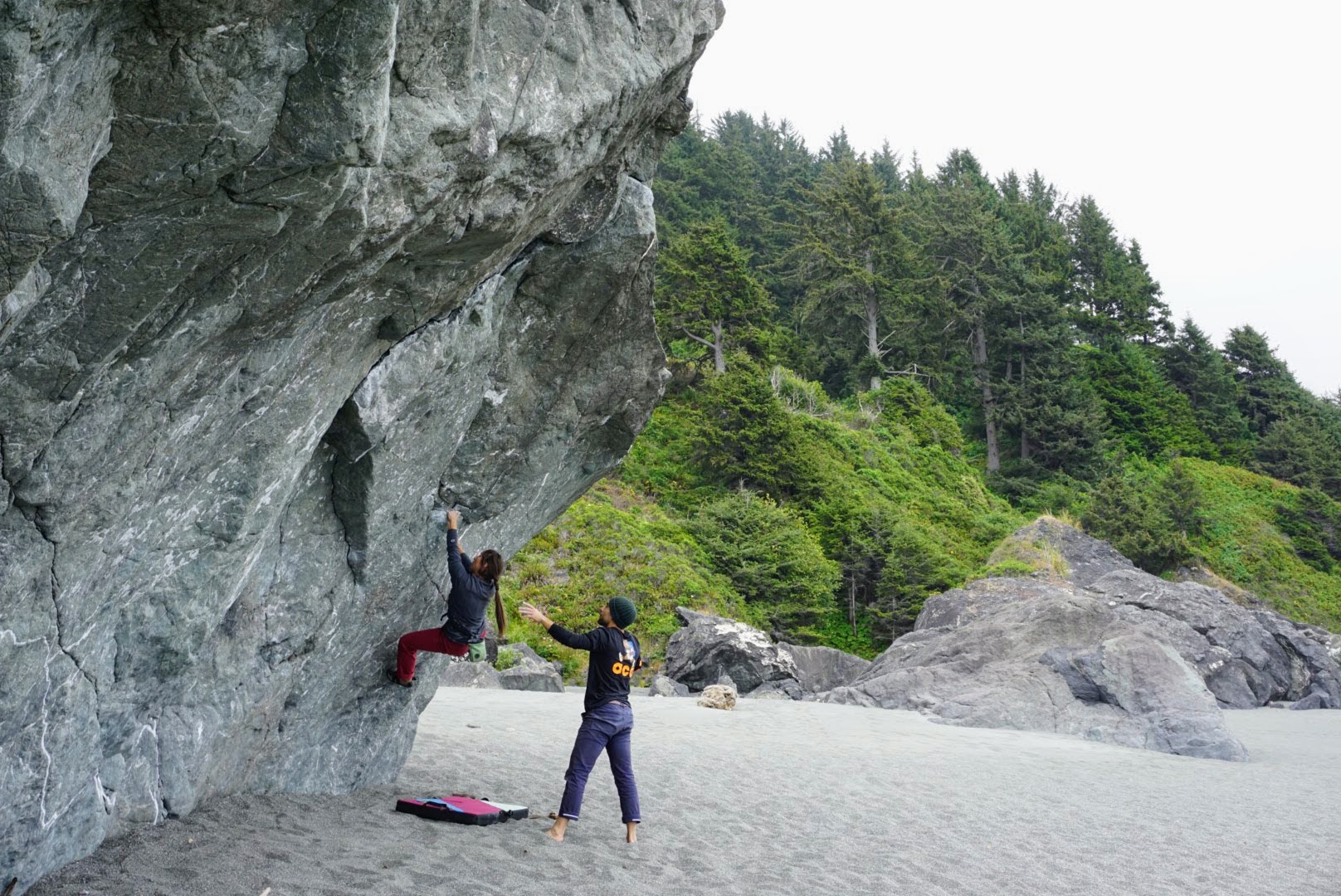 About five miles down the road from Kamp Klamath is a 10-mile scenic drive through Redwood National Park. There were quite a few spots to pull over and little hikes all about, so we stopped at one for a bit to get a closer look. 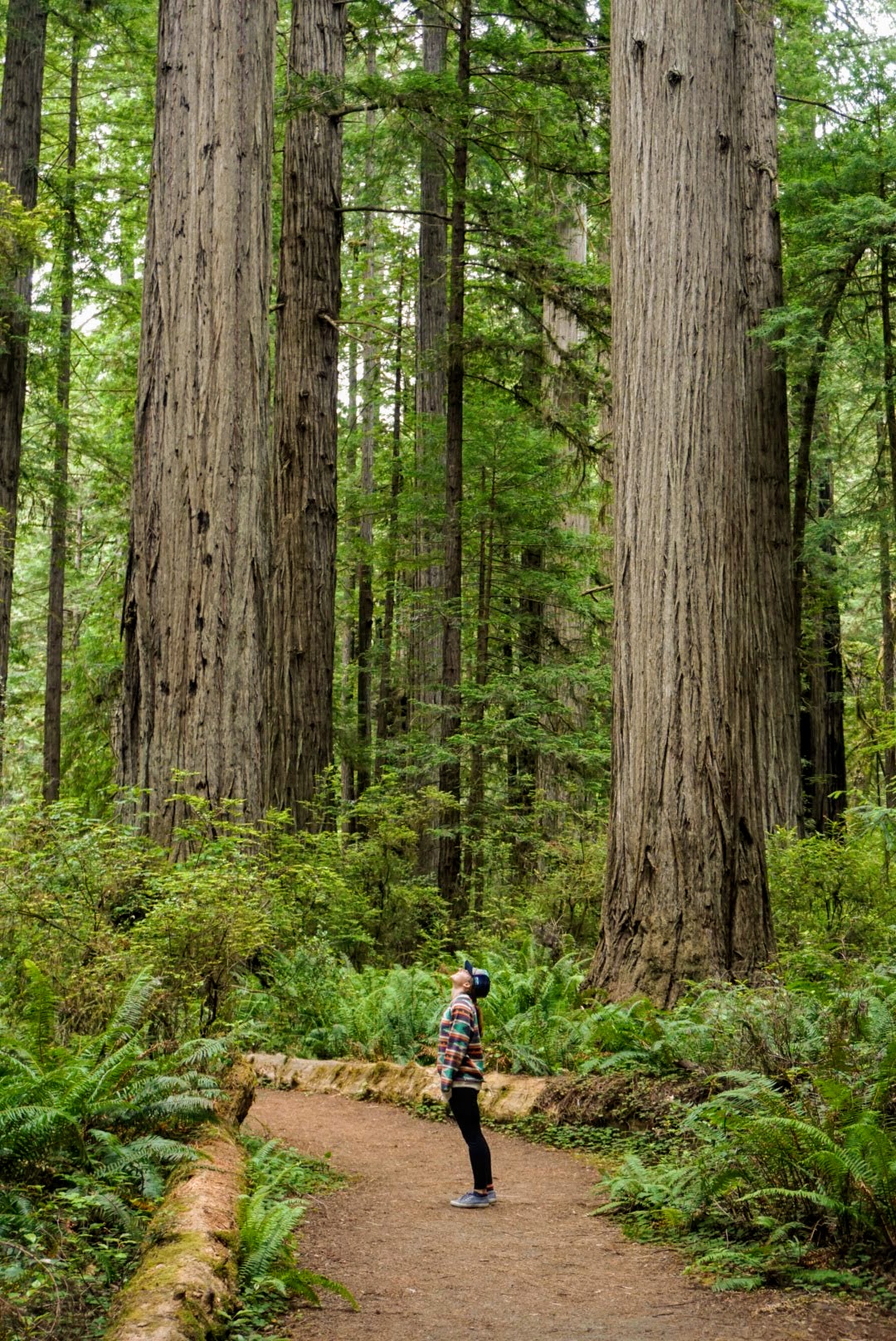 A mere quarter mile into one of these trails and the clatter of the world dampens to a still as the trees seem to sponge up all outside sound. It’s as if the forest itself is offering you a reprieve. A sanctuary from the clamor of life. To be in the company of the ancients here inspires a familiar feeling of sublime. 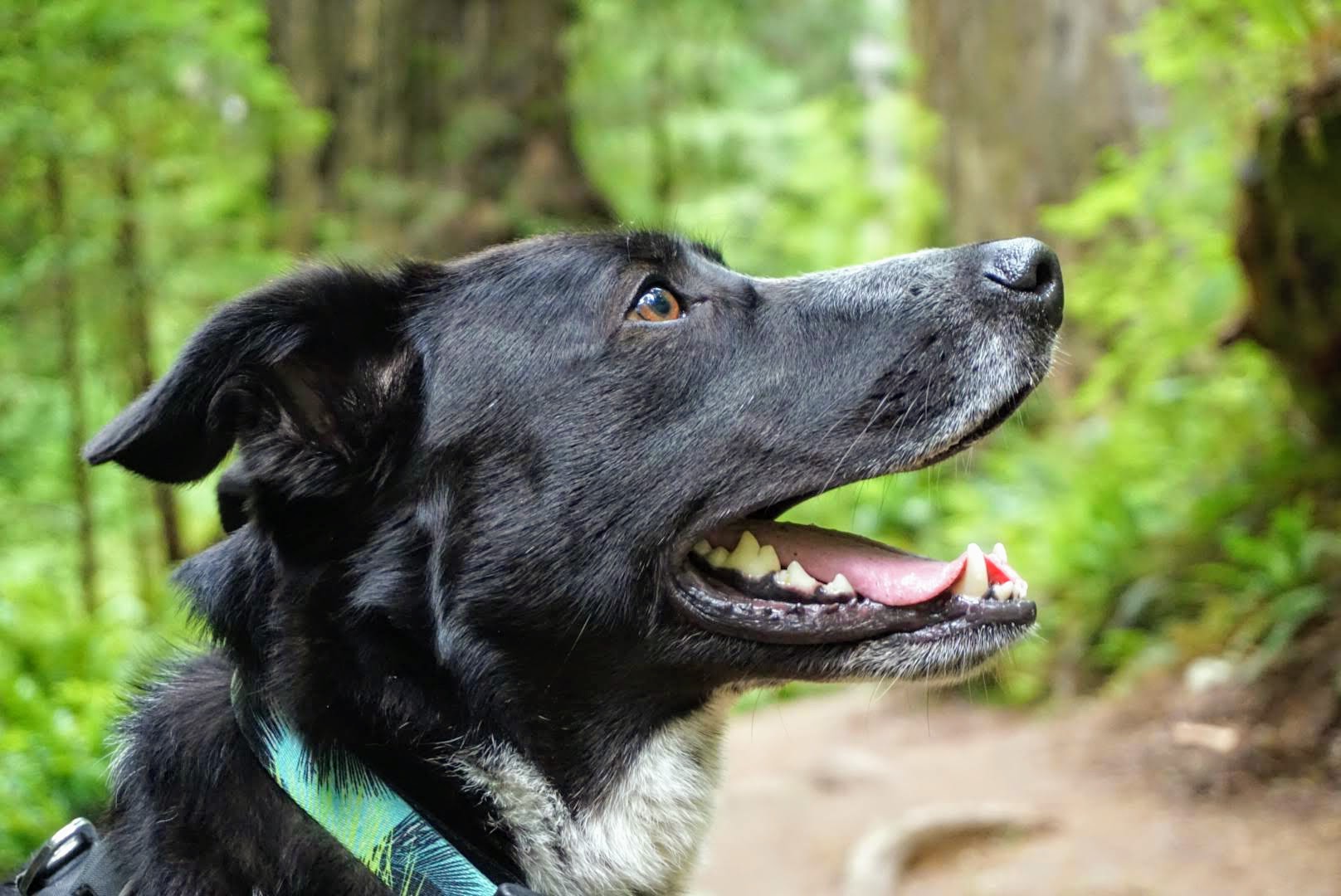 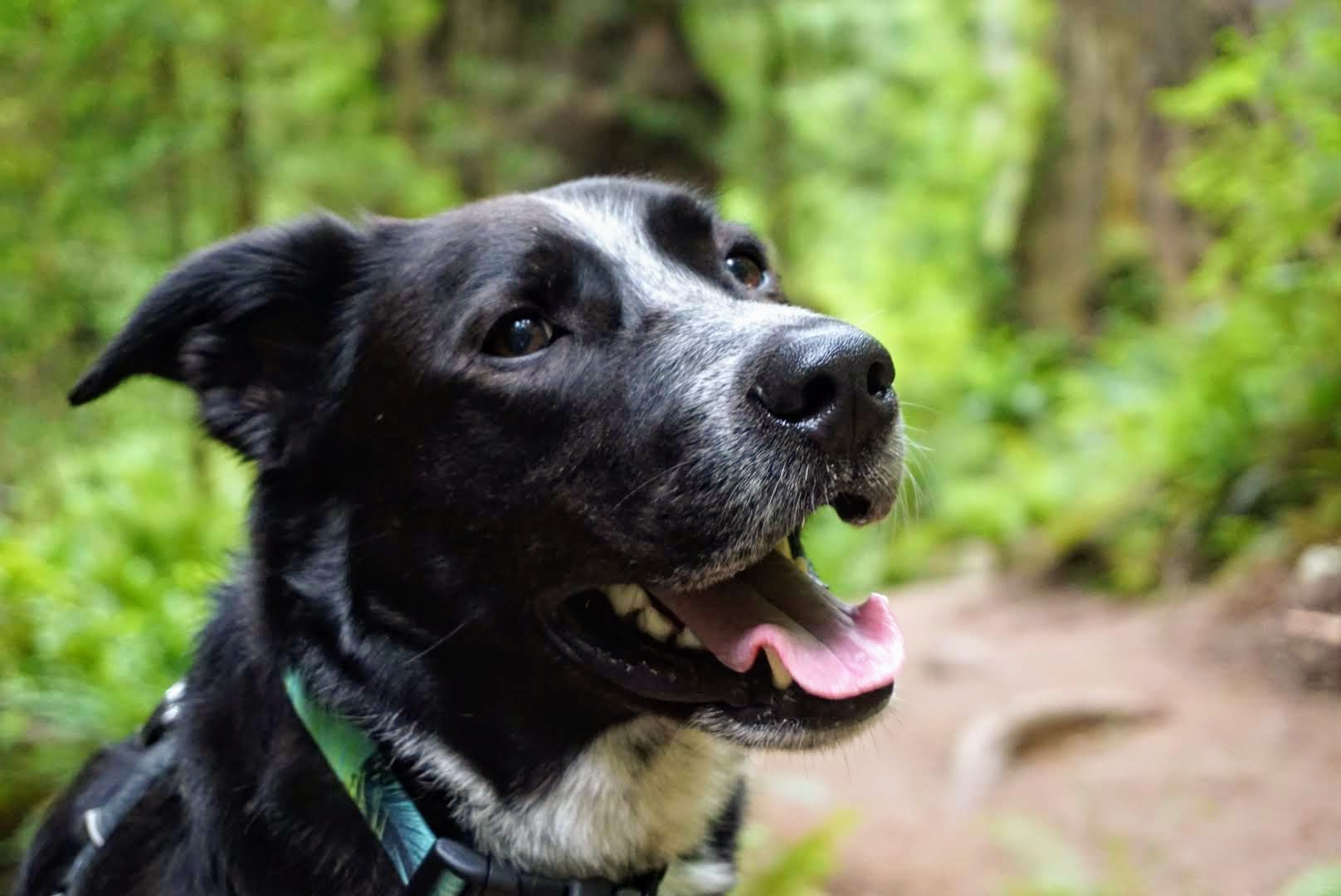 I’m certain Cedar gets as much enjoyment out of the beauty in these lands as I do. Whether it’s his own doggo joy or whether he can pick up on my happiness or both, I love bringing him out to these places if only to see his smile. 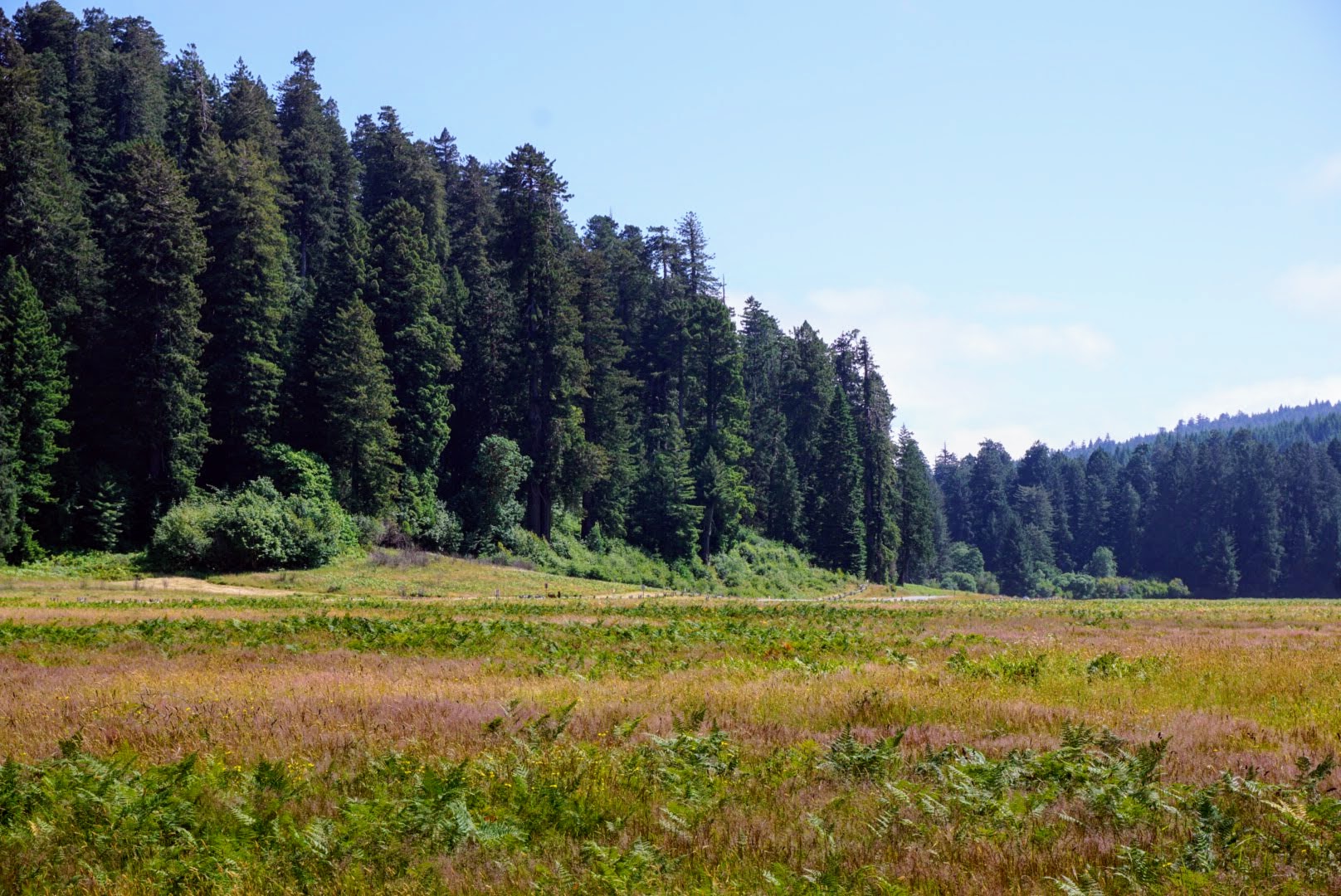 At the heart of this drive is a great meadow called Elk Prairie, where a herd of Roosevelt Elk live. There’s also a visitor’s center, trailhead access to a bunch of hikes, and a first-come first-serve campground! 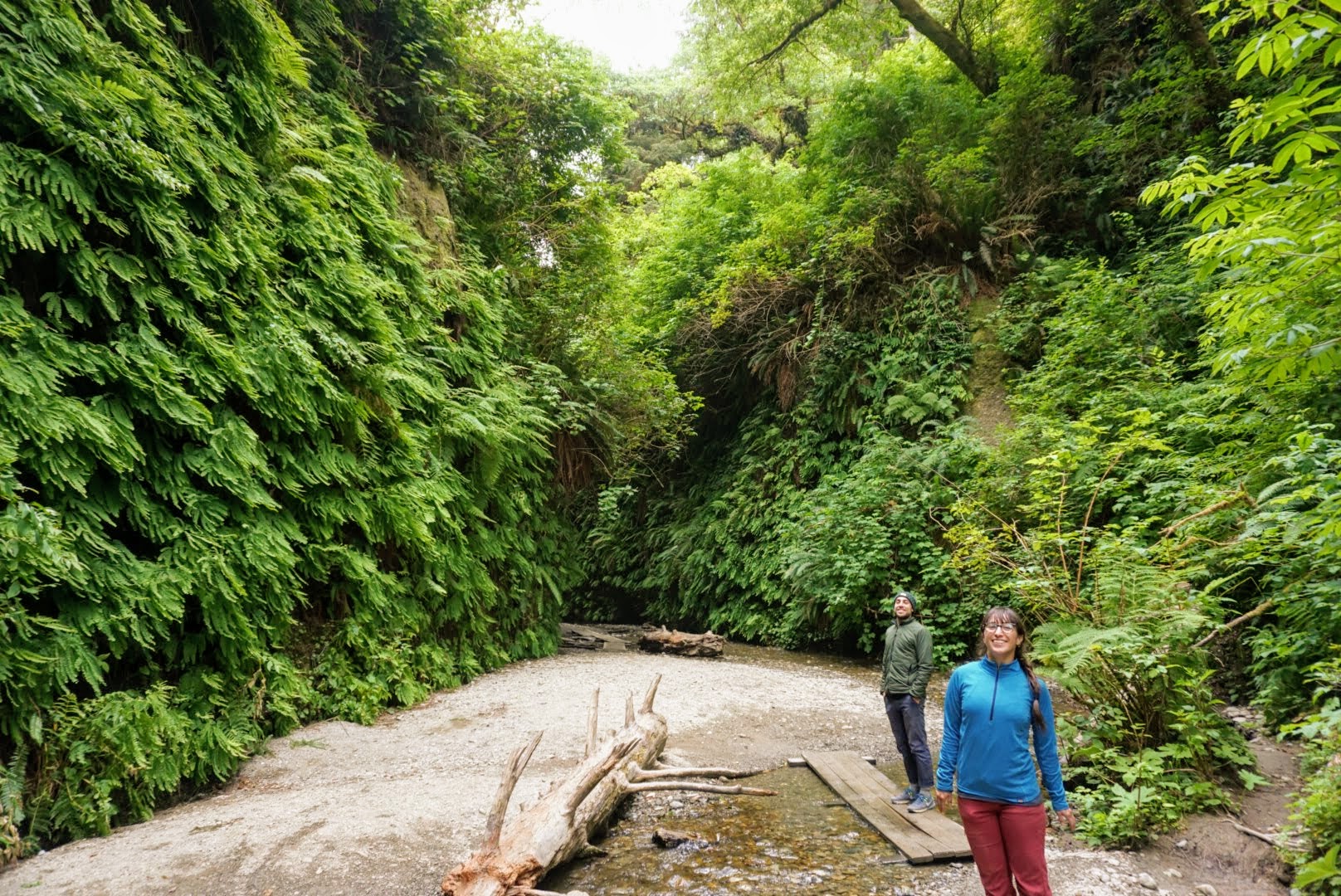 Wandering into this canyon is a surreal experience. A lush display of ferns line either wall of this little canyon tucked away in the Redwoods Coast. Both man-made and natural bridges pave the path over a small creek that carves its way through. Outside sounds drift away as you take in the sights and beautiful flora and fauna of the Fern Canyon. Amphibians, scurrying critters, birds fluttering about. Every twist and turn of the canyon brings another wonderful section of the creek bed as downed tree trunks usher you through the walls of prehistoric ferns. There’s even some optional scrambling over the giant driftwood and ankle-deep wading through the water! 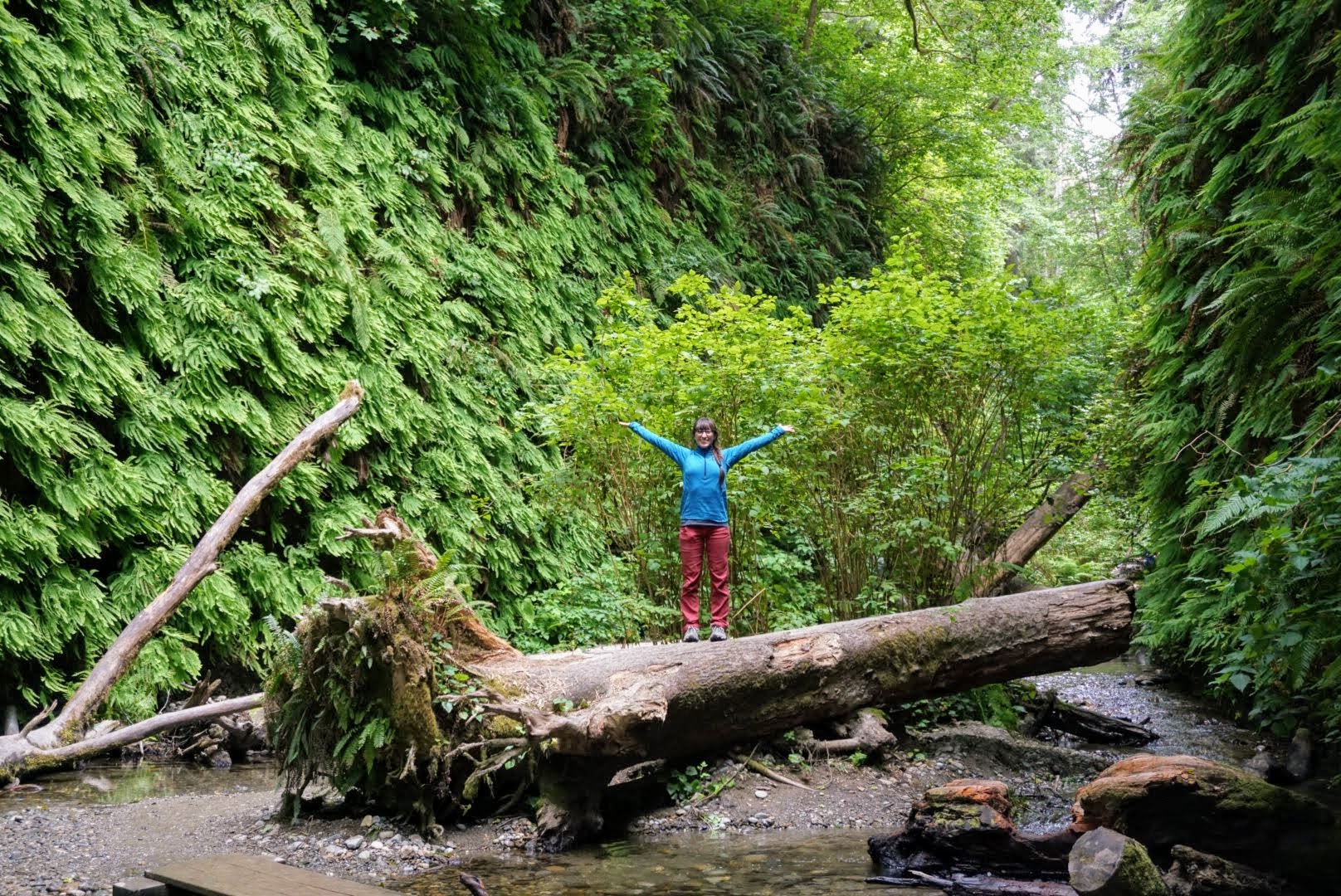 Fun fact: this area was featured in Jurassic Park 2: Lost Worlds. Which makes total sense since it definitely feels like a little dinosaur might be waiting for you around a corner. 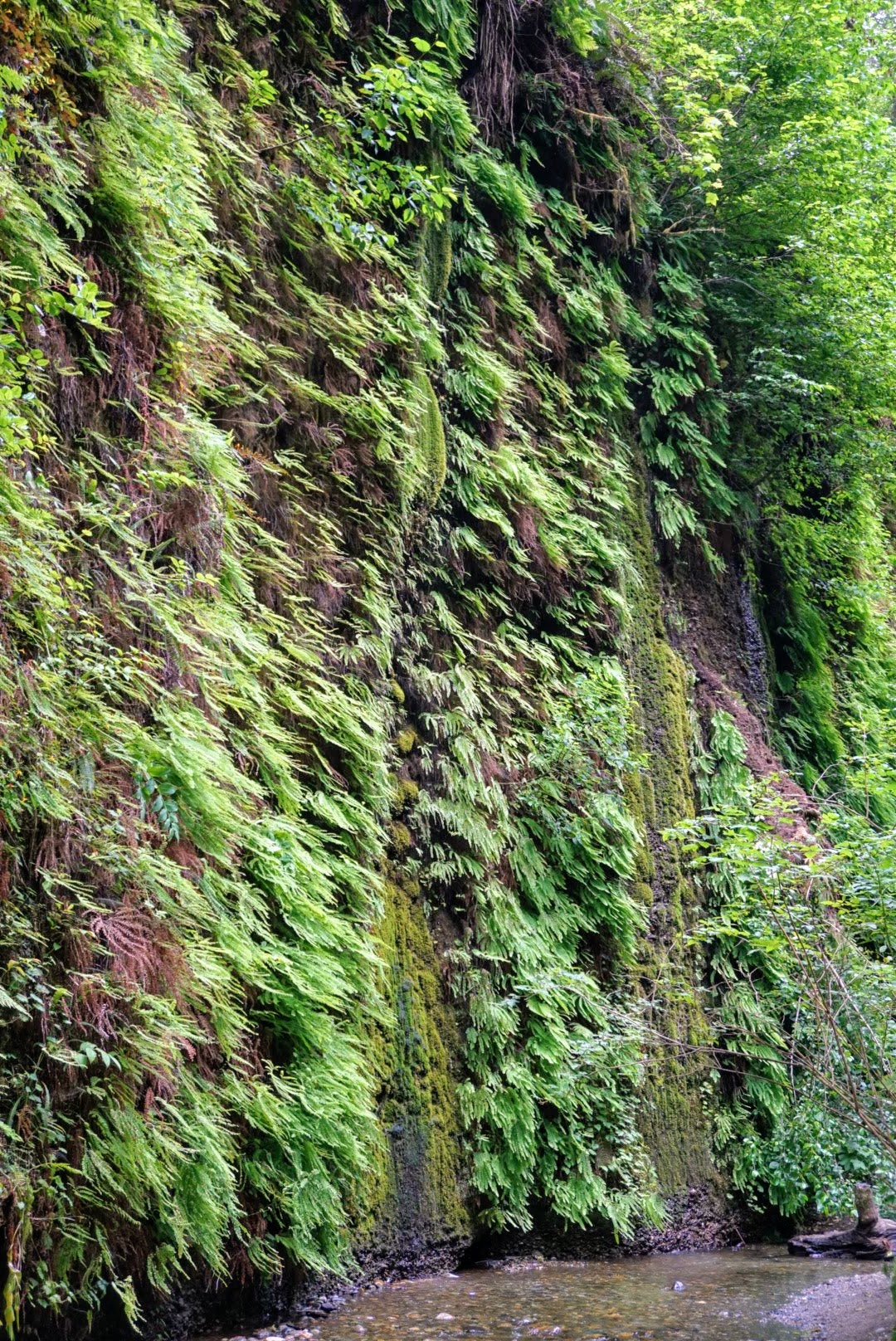 Driving along the Oregon Coast is a wonderful experience. It’s ripped straight out of an adventure novel: The path winds along the hilly coastline, weaving through boundless forests and quaint seaside villages. There are almost too many sights to take in: Peninsulas, coves, natural bridges, free-standing vertical columns of rock rising out of the ocean.

And then, near dusk, the sky begins to radiate. As if someone were slowly sliding the switch for the mood lights, a luminous display of shade and color descends on the scene. We pulled into Harris Beach State Park, which offered a perfect vantage for the show. This park is home to Goat Island, the largest island on the Oregon Coast and a breeding site for rare birds like Leach’s storm petrels and tufted puffins. 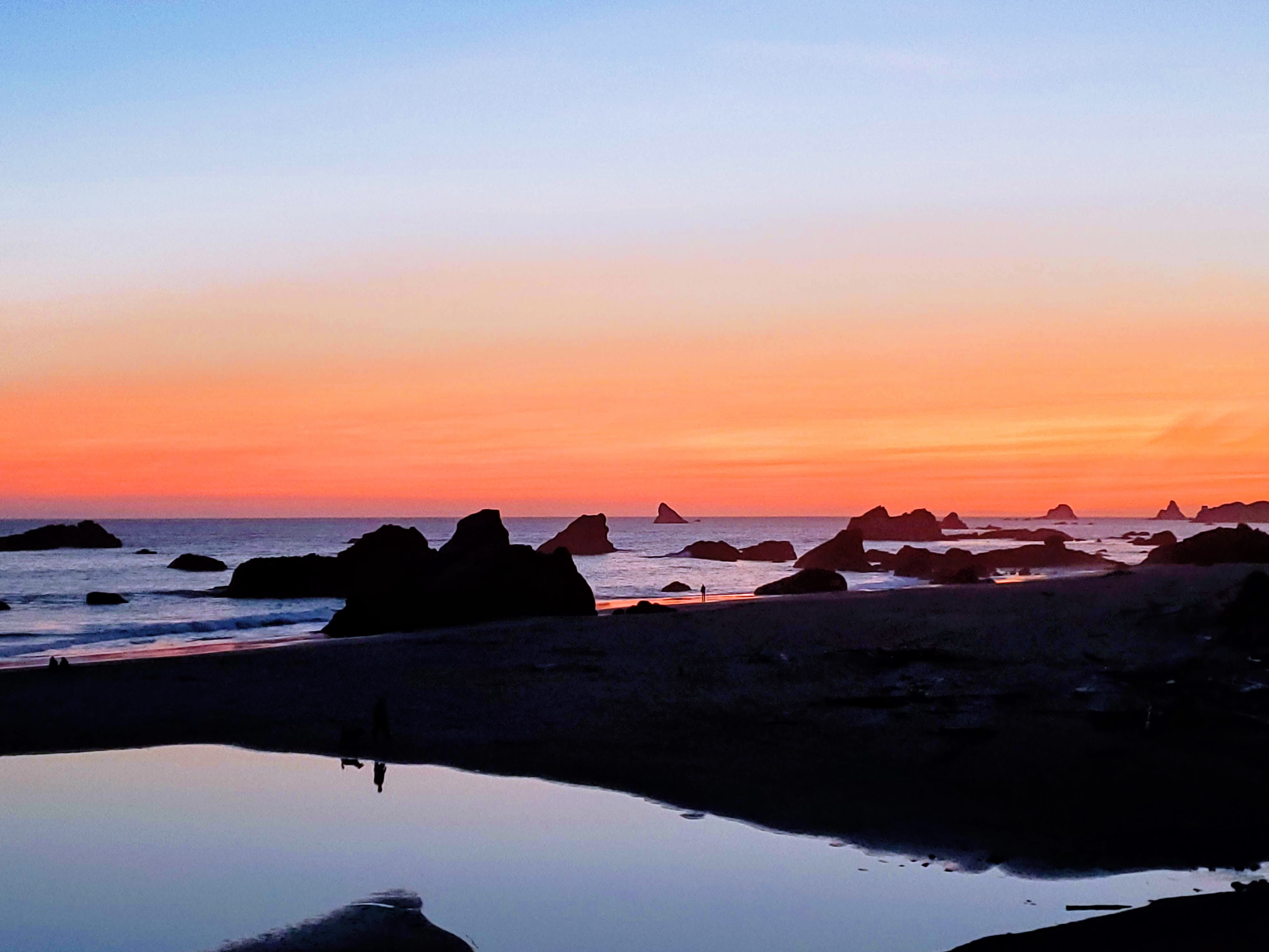 Pinks and blues streaked the sky, the shoreline surrendering to a resplendent glow. A respite from the noise of all else. Endless sea stacks silhouetted along the mirror of water ahead, an ocean of trees behind. Blues dissolved into purples, the moments melted. Frozen in the amber of the setting sun. 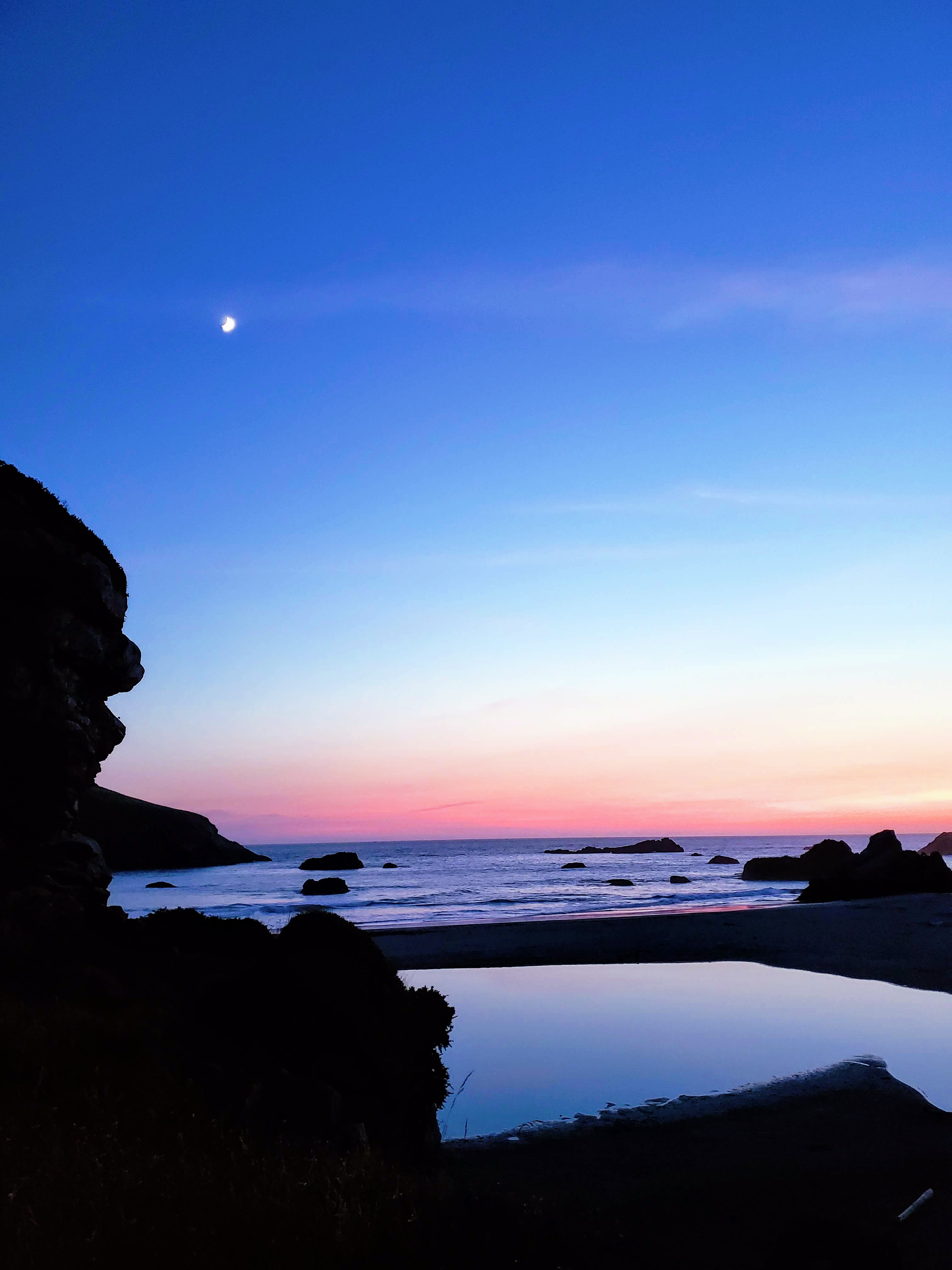 Other places to climb

It turns out Lost Rocks isn’t the only spot to hit up for climbing if you’re in the area! Here are a few other nearby crags that struck my fancy, but didn’t have the time to check out. 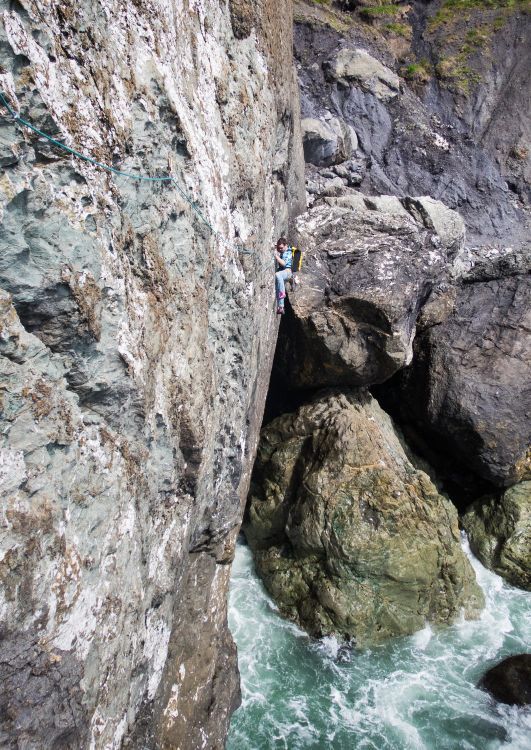 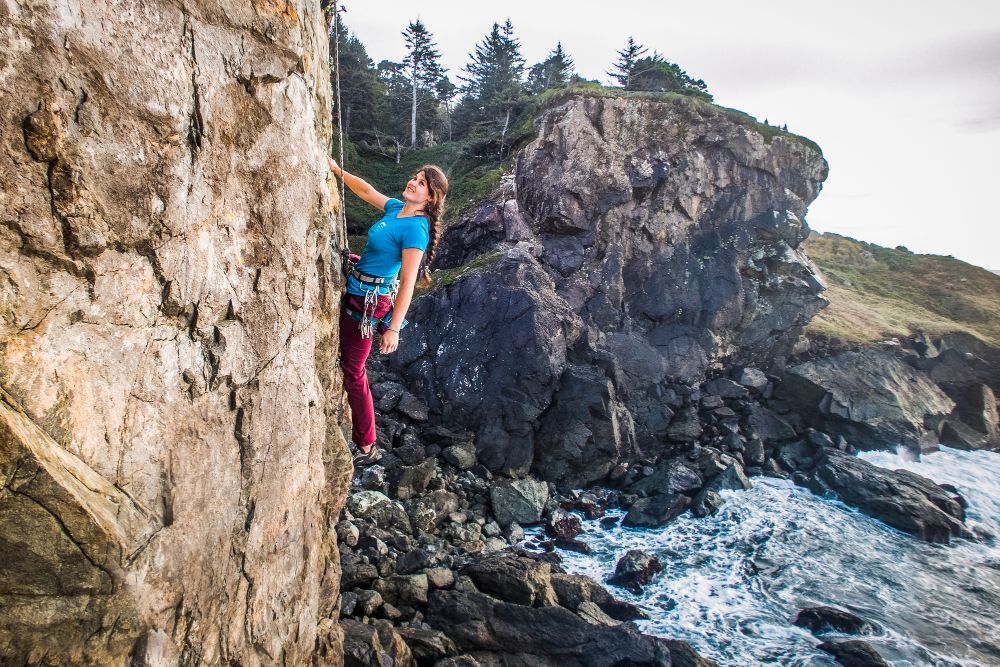 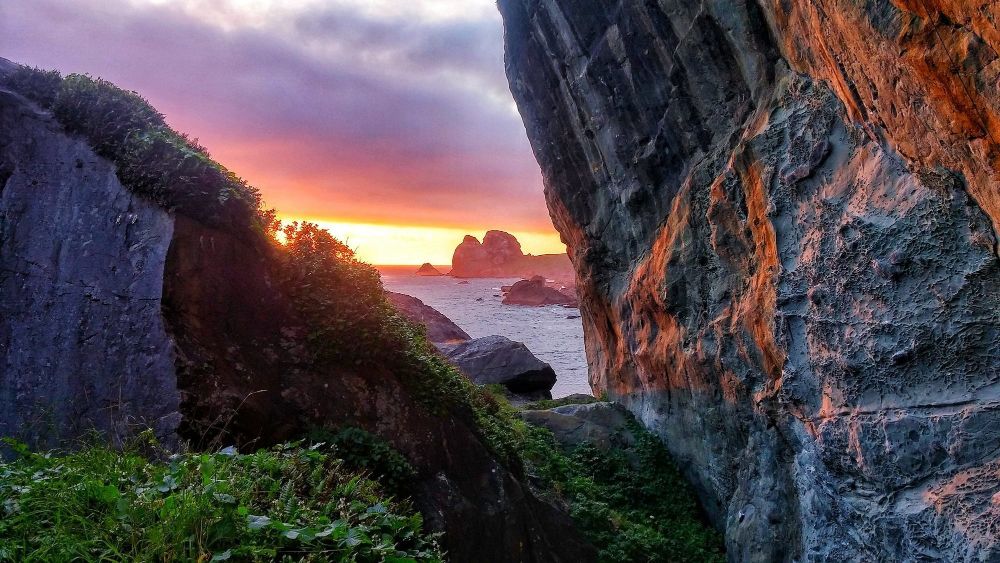 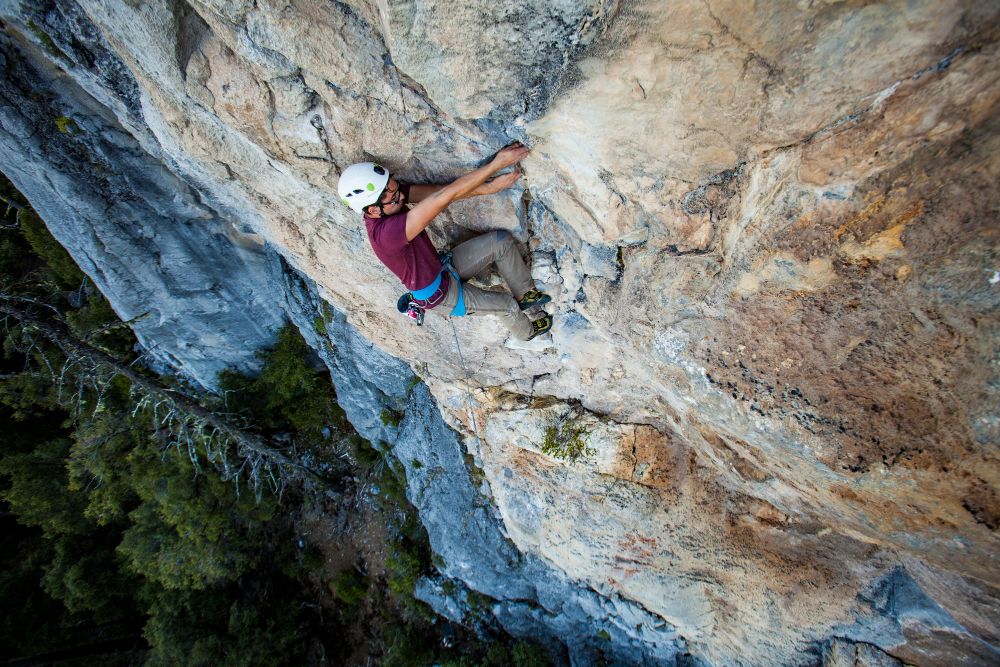 Other Sights and Stops

And here are some other spots to stop by if you’re making a trip out to the Southern Oregon Coast: