This post is a continuation of a read I started in 2019 where I decided to make my way through a bunch of the major fantasy epics that started in the 1990’s. Included are reviews for Book 6 of The Wheel of Time as well as Soul Music, the 16th in the Discworld series. 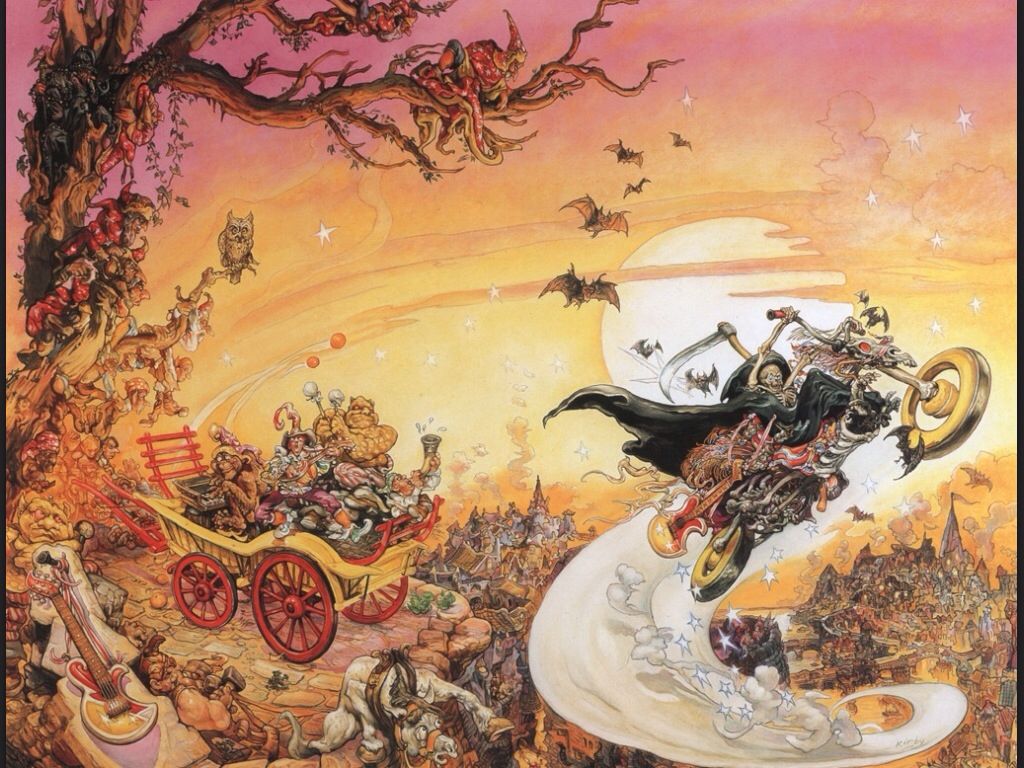 The third entry to the Death series of Discworld! In this one Death takes another holiday, and his granddaughter, Susan Sto Helit, takes over for him while he’s out. Then we have the main plot about Rock & Roll being invented on Discworld. It’s like this book was made for me!

Unfortunately, and surprisingly, this book didn’t hit as hard as previous Discworld novels. The previous two entries in the Death series are some of my favorite Discworld books, and Reaper Man especially is one of my favorite books I’ve read period. But this one falls a little flat: the plots aren’t as strong, the themes don’t resonate, and the jokes are mostly just rock reference puns. Which is appreciated, but I’ve gotten used to Pratchett’s distinctly layered barrage of humor.

The saving grace for this book though is the introduction to Death’s granddaughter, Susan. While she isn’t front and center, she manages to steal any scene she’s in, and is set up to be a promising character in future Discworld novels.

I also enjoyed the description of the song that won Imp the harp, a song that “took every man and woman and thing by the hand and showed him or her the way home”.

There happens to be an animated adaptation of this novel, and while the animation is a little choppy, it’s pretty fun to actually be able to see and hear all of the music references made in the book as well as an actual rendition of this beautiful song, which happens at 2:15:19 in the movie if you’re curious: https://youtu.be/JIgE23LHgPQ?t=8119

2. Lord of Chaos by Robert Jordan

Lord of Chaos was much like The Fires of Heaven for me, largely hit or miss. A lot of mostly uninspiring political intrigue happens around the map, Nynaeve gains an awesome new ability, and we get a very fun climactic action scene to top off the book.

I’m now six books into this world, and there is an impressive amount of plot lines and characters being covered. It’s a little hard to keep everything and everyone straight, and even more difficult to know just what events are truly meaningful. I’m sure there’s a lot to dig into here for those willing to look, but I have to admit that it hasn’t captured me quite as strongly as other fantasy series I’ve read so far.

I at least know that during the times I was reading I was pretty immersed in the world, so I think that counts for something. Jordan’s ability to teleport you into this rich and vibrant world and keep you there has got to be one of his strongest suits and the most satisfying part of reading this story. Onto Book 7, A Crown of Swords! But first, I’ll delve into some finer details of what I liked about Lord of Chaos:

Another False Dragon pops up, and this one seems sinister. Rand doesn’t seem to care though and puts Mazrim in charge of a bunch of male channelers, in order to create a little army of wizard dudes.

Our support does some serious healing by figuring how to fix Stilling / Gentling! I wasn’t expecting this event, and I was stoked about it, and I loved how stoked Nynaeve was about it when she figured it out.

We get a pretty intense scene where some random Aes Sedai named Alanna pops in and bonds Rand against his will. This was another unexpected scene, and the violating nature of the event was almost uncomfortable to read. I’m pretty curious about the ramifications of this, given what we know about bonding and Warders. It’s not explored too much yet, so I guess we’ll have to wait and see.

The Battle of Dumai’s Wells

So, this book is pretty much just filled with Rand and Egwene running around fielding a bunch of politics stuff between various cities and groups. It’s mostly background noise for me, and it was a little hard to focus through this book. But I’m glad I stuck with it, because this book culminates in one of the most epic battles in the series so far.

Earlier on, a bunch of bad Aes Sedai had captured Rand and stuffed him in a little box and were going to bring him back to the White Tower with the help of a massive army of bad Aiel. But, the Aiel betray the Aes Sedai at the last second!

Thousands of Aiel have Rand and the Aes Sedai surrounded, and this is where Perrin and his company come in. Perrin, an army of wolves, Two Rivers men, various other battalions from around the map, a bunch of good Aiel, and Loial all decide to just Leeroy Jenkins headfirst into the fray and start battling the Shaido Aiel, outnumbered something like 3:1!

And finally, after it’s not looking so great, Mazrim Taim and his little army of Ashaman wizard dudes teleport in and gruesomely put an end to the battle. I think this scene works especially well because it could have easily been an epic scene of the Ashaman coming in and saving the day, but Jordan takes that away from us by showing us the horrifying effect of being able to wield this kind of power.

Oh also, Rand actually breaks free from his box at some point and immediately stills a bunch of the bad Aes Sedai. Crazy.